The Littlefield Chamber of Commerce and Agriculture has a long history in Littlefield, since its charter was issued on August 19, 1938. The chamber currently has 103 members, who are volunteers in investing their time and money in a community development program. 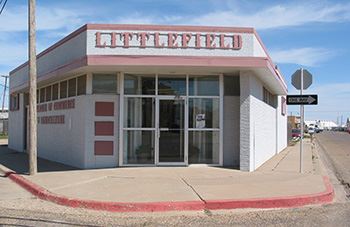 A citizen who is interested in helping to develop the area - which means more money, more business, more jobs, and better living for everyone - is eligible to be a member of the Chamber of Commerce.

The work of the Chamber is financed by the investment of the members who support it on the basis of their ability to pay and their interest in the progress of the area. Jim Jones is the Executive Director of the Chamber of Commerce.

Among the special community projects, the Chamber sponsors are:

A fore-runner of the present-day Chamber of Commerce was organized in 1913, with R.S. Bear, Littlefield's first banker, acting as its president. According to historical records, Campbell Jackson Duggan, the town's first postmaster and head of the Littlefield Land Company's Title Department, was the loosely-organized one-man "booster club." 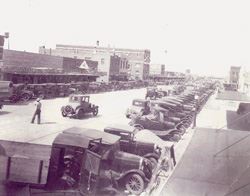 Duggan exhibited the best specimens of crops grown on the Littlefield Land Company's Demonstration Farm - a farm which employed a Russian botanist - at county fairs in several states to draw people to this area. Men's groups, such as the Woodmen of the World Lodge, as well as the Aftermath Club and Woodmen Circle for Women, worked together in organizing a "Welfare Club" in Littlefield in February 1915.

Its farsighted members, a fore-runner of a certified seed organization, wanted to produce choice products for a large market and eventually to promote the location of a cannery in Littlefield. Some of the women had their own demonstration gardens to help promote the area.

In December 1916, farmers and business men decided to work together to promote the community and organized the Littlefield Commercial Club. The next year, a less-serious group known as the "Booster Club" conceived the idea of promoting shopping in town by traveling as a group to area towns and staging "food and fun get-togethers."

The same concept was used years later by the Littlefield Jaycees or Junior Chamber of Commerce, organized in the 1940's. They promoted the Littlefield Rodeo and built the rodeo arena, as well as Little League ball fields. Other Jaycees' projects included spraying the town for mosquitoes and keeping the weeds down. They also built an iron lung for possible use by polio victims in the area.

Creation of the Chamber of Commerce

The civic-minded Jaycees helped organize the present-day Chamber of Commerce and Agriculture. By banding together to undertake aggressive action programs that are in the best interest of the total community, both businesses and the community prosper.

Active members receive the greatest benefit of Chamber membership, such as networking, businesses men and women working together to solve common problems, and making new friends. People do business with people they know and trust.